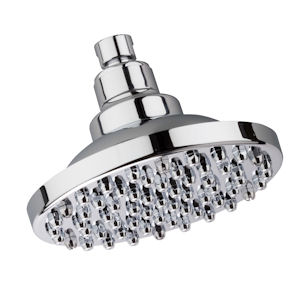 The Culligan RainDisc Rain Shower Head Filter (RDSH-C115) is a shower filter that reduces chlorine and other contaminants from your shower water. This shower head filter installs on any standard 1/2" threaded shower arm, though the optional Culligan RainDisc Hi-Lo Adjustable Arm (RDA-150) is a special extension for this particular shower head that allows for double adjustment to provide more height and different water flow angles.

This Culligan rain shower head filter (RDSH-C115) is packaged with the Culligan WHR-140 shower head replacement filter cartridge (which reduces chlorine, scale, rust, sediment, the odor of sulfur, and other impurities from your shower water), 6 screws (Philips screw driver required), and 1 flow restrictor. The package also includes Teflon tape and a water filter cartridge change reminder sticker. This shower filter comes in a chrome finish. The RainDisc feature allows for better diffusion of your shower water for a more gentle and thorough cleaning.

Culligan shower head filters feature Level 2 Extra Filtration and reduces chlorine (97% reduction), scale, rust, sediment, the odor of sulfur, and other impurities from your shower water. Recent studies have shown that chlorine in shower water is a major health concern. People absorb more chlorine in the shower than they do when drinking chlorinated water. Excess chlorine in your shower water can cause dry and irritated skin, acne, hair dryness and damage, as well as other health problems in many people. The use of this shower filter will leave your skin and hair feeling softer and cleaner due to its removal of excess chlorine as it helps to protect you and your family from the dangers associated with too much chlorine and other impurities.