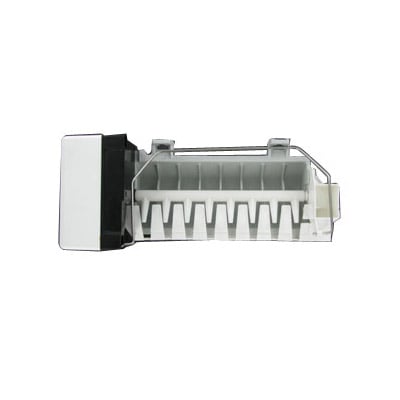 Retail:
You Save: 21%
Save 45% with a compatible ice maker
Compare & SaveUse the table below to compare
120V
Voltage
120V
8 Cubes
Number of Cubes
8 Cubes
Wiring Harness
Includes Directions
Sign up for the Home Filter Club during checkout.
You choose how often you want your filter, and we take care of the rest.
Are you a purchasing agent? Purchasing for a business?
Contact [email protected] to gain access to case quantity discounts, account management and terms!
Product Information
Customers Who Bought This Item Also Bought
Whirlpool 4317943
Supco RIM943

The Whirlpool 4317943 includes the following components:

The Whirlpool 4317943 fits select refrigerator models from the following manufacturers:

The Whirlpool 4317943 is correct replacement for the following model numbers:

Received ice maker in 3 working days. It was really easy to install and took probably no more than 15 minutes. After power was plugged in again, it took about 2-3 hours before it start making ice. After 24 hours my ice tray is now half full. It was also easy to transfer the shut off arm from the old one to the new one. I estimate by doing it myself I saved about $150.00 You only need 1 ratchet, 1 socket and an extension for the socket. You cannot see the first bolt on the left side as it is immediately behind the housing, that was the hardest part to get the socket over the bolt.

Ice maker arrived within two days from being shipped. Fantastic! Read all the instruction very carefuly as I went. Old Ice maker came out as described in instructions. Installed new ice maker according to instructions and everything went as they should have, FANTASTIC !! No rocket science needed here. I just proved anyone can do this cause everything usually goes wrong for me somewhere along the way of doing as the instructions say. Being dislexic DOES NOT help me any either. Many thanks to filtersfast.com for saving me a ton of money too. Local parts house wanted $127.99 for the very SAME ice maker. Did not take me long to make a decision on that. Thanks

Ice maker kit arrived in 5 days. I was replacing one in a KitchenAid refrigerator that was about 13 years old. None of the wiring harness were compatible so I had to remove the wiring harnrss from my old unitand install it on the new unit. Also, the bracket for the third scew on the bottom of the icemaker did not line up with the hole in the frig so I had to swap it out with the one on the old unit. And had intall the wire arm as mentioned in the specs. It look a while to get everything figured out but once I finally got it installed, it works perfectly. Saved a ton of money compared to hiring a repairman

Ordered my replacement icemaker from Filters Fast and their very helpful sales tech. It was easy to install and came with wire harnesses for various model applications. Remember to save shut off arm from your old ice maker as new one does not provide one. It is easy to pop out with slight pressure carefully apllied with needle nose pliers. Also remove power from unit during install.

Just received my replacement icemaker. Including the time it took to open the box, it tool only 11 minutes to remove the old icemaker and install the new icemaker. Local parts suppliers wanted $105.00-$120.00 for the part alone. If I had it installed by a tech, it would have been an additional $65.00 to $90.00. Total cost to me was ~$75.00 and 11 minutes of my time. Great price and delivery turnaround.

I am so happy I found FiltersFast.com. I always buy my refrigerator filters there, but this time I needed an ice maker and being able to purchase it from them saved me half of what I would have spent for the exact same part at the retailer where I bought the refrigerator. I usually purchase online, but I wanted to be sure I was making the right choice, so I called and the man was so helpful and reasuring. I recieved promt e-mails updating me of the status of my order. I ordered on Wednesday and was making ice Saturday! They are the best online merchant I have ever used.

Perfect replacement, works great and saved $250.00 by doing it myself!

Recieved the ice maker in days. It was damaged during shipping but with a phone call they had another on the way. Simple installation and started making ice within hours!! Very pleased so far and would recommend this site to anyone. Also had most affordable price on the net. Thanks again!!

We ordered the ice maker kit from this website, and recieved it in three days. Very easy to install, done in less that 20 minutes. It was half the price of the same replacement kit from sears. Well worth the money!

The Supco RIM943 is a compatible ice maker kit that replaces the Whirlpool 4317943 icemaker service kit and many other refrigerator icemakers. It is made to be a direct replacement plug-in, though it can also be used in pre-wired refrigerators as well.

The Supco RIM943 is for use with the following brands and associated model numbers:

The Supco RIM943 is correct replacement for the following model numbers:

received my RIM943. Attached the wires, leveled it and within two hours had ice. Was so simple, that it was mind boggling. No stress, No worry. used same wires already in fridge and same holes. cutting out waterway was simple. What more could you ask for?????

Ordered the replacement icemaker after reading the reviews. Arrived in 4-5 days. Was apprehensive about the installation. Had to cut out the water fill slot as others mentioned. ONLY problem I had was getting the old icemaker unplugged. It was hardwired in the Whirlpool side by side. When I finally got the old unit unplugged and the new unit plugged in,all the screw holes lined up perfectly and the installation was a breeze.

Knowing me I was afraid I would do something wrong and have a mess & problems. That was not the case, unit installed easily especially with the tips I learned from reading these reviews. I got a great ice maker and saved a bundle doing it myself. I am proud and happy.

called on this model , ordered it,installed it , and it works like the one that came with my kitchenaid . Can not ask for BETTER !!! 5 STARES !!!

The heater in my Whirlpool ice maker burned up. I ordered this unit for 1/2 the price of anything available locally, including shipping. Easy bolt in installation. Made ice one hour after installed. Didn't need to adjust anything. EXCELLENT VALUE!!!!!

I called the 800 number before ordering and the customer service rep was very friendly and very helpful. The Ice maker is almost an exact match for the old one in my whirlpool side by side. It was easy to install and started making Ice within an hour. The wiring harness in my fridge is hard wired but it fit perfect in the new maker. The only problem with the installation was cutting out the notch for the water. It's made of very thin plastic and not notched out enough to just pop out, I had to cut it out with a wire cutter. The unit came with 3 different wiring harnesses and a shut off wire that was different from the one on my unit so I used the original.

Easy install, but needs time to get cold before making first batch (duh!). Then it works like a champ. The install will give you an excuse to clean out the freezer - since it probably needs it. Might want to clean out the defroster drain line while you are at it.

Very easy to replace my ice maker with this new one. I did have to use a knife to cut out the notch for the water to fill the tray. Otherwise,no problem and I had ice within hours. Great bargain.

very simple loosen-up rail remove 3 srews unplug icemaker conector do reverse procedure. there was aminor problem (water no filling) add water manually to tray after the first tray works normally,think thermostat have to get to temperature or the whole system have to get to certain temperature.'if does not work inmediately add water to tray then it will work'.

This was a simple drop in replacement in our Kitchenaid refrigerator/freezer. One thing I had to do was use a utility knife to cut out the notch where the fill tube is to protrude. Other than that, it was a simple matter of backing out 2 screws and removing a 3rd. Making ice within a few hours.

I researched that this aftermarket product was correct for my Whirlpool. Very simple. Remove 3 screws, unplug the old one and replace with this one. A simple plug and play. Had Ice within 45 minutes. Took less than 10 minutes to replace my old one!

Due to the advancing age of our Kenmore/Whirlpool frig., we choose this universal replacement when the motor went bad on the OEM unit. While this unit initialy did not appear to have cube size adjustment... it does and if that's important all one need to do is use an original cover/knob from an OEM unit. We're now back to making ice from scratch just like the Amish.

Great bargain. The gear in my old Whirlpool ice maker went bad.Had to buy a replacement module.Bought this one and it was easy to install.Plugged it to the old electrical connection.One week later it is still making beautiful ice.