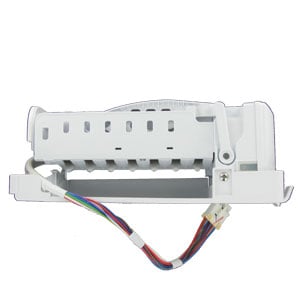 Ships in 1 to 2 business days.
$227.99 ea
Currently Unavailable
Out Of Stock
Notify me when available!
Sorry, this item is no longer available. View our selection of Icemakers for more options. Please confirm specifications before ordering.

The Samsung DA81-01421A Ice Maker is used as the replacement icemaker for the Samsung REFSVC though it is also a compatible ice maker replacement for the widely used GE WR30X10097 ice maker (see refrigerator model list below).

The Samsung DA81-01421A icemaker replacement kit has many special features including an electric motor, an electronically operated water valve, an electrical heating unit, motherboard and other components. When the thermostat sensor in the water tray senses that the optimal temperature has been reached it electronically signals that it is ready to begin ejecting cubes.

The Samsung DA81-01421A Ice Maker for GE WR30X10097 is correct replacement for the following model numbers: