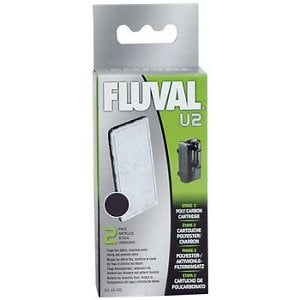 This is a Fluval U2 Poly Carbon Underwater Filter Cartridge (A490) for the Fluval U2 Underwater Aquarium Filter System (A470). The Fluval poly carbon underwater filter is used as the Stage 2 combination chemical filter as well as secondary mechnical filter to remove fine debris and very small particulates while the other side is composed of activated carbon to improve water clarity and further reduce chemicals, odors, colors, and other impurities.

This Fluval U2 poly foam pad replacement for the Fluval U2 Aquarium Filter is made with a dense poly foam layer on one side to trap fine debris, particles, and impurities such as dirt, sediment, sand, rust, limescale, dust, and other contaminants. The other side uses activated carbon to further filter the water in your aquarium, removing chemicals, odors, colors, and more.

Fluval U2 poly foam pad filter replacements should be changed approximately every 2 weeks.

The Fluval U2 Poly Carbon Underwater Filter Cartridge is correct replacement for the following model numbers: