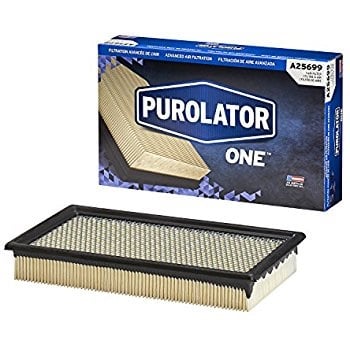 The Purolator A25699 Car Air Filter Replacement 3-Pack will keep your vehicle running longer and more efficiently. This car filter is made out of a high-density, multi-fiber media that will trap 96.5% of contaminants, keeping them out of your engine. The Purolator A25699 also features a sealing gasket that forces more air through the filter and traps more particles.

Did you know that regularly replacing you cars air filter can improve your gas mileage by 10%. The Purolator A25699 will also prevent costly trips to the repair shop by keeping particles that can harm your engine trapped in the filter.

The Purolator A25699 Specifications:

Using the Purolator A25699 will not void your vehicles warranty. This Classic Air Filter is for use on your select Ford, Lincoln, Mazda and Mercury vehicle.

This filter is labeled Group 7 by Purolator

Price is for a 3-Pack of replacements