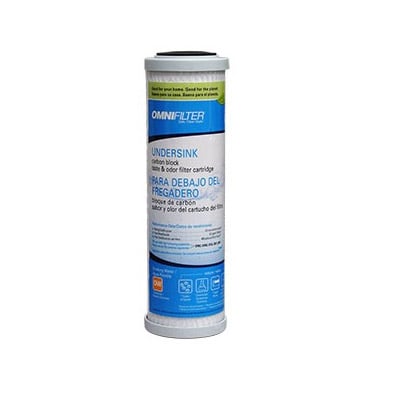 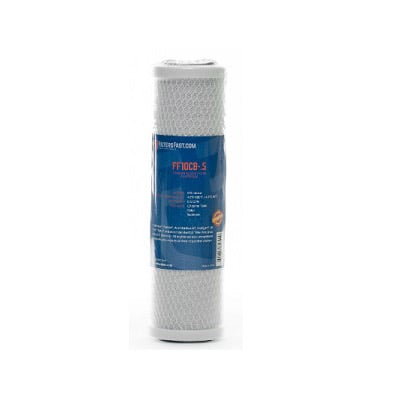 Retail:
You Save: 25%
Save 69% with a compatible filter
Compare & SaveUse the table below to compare
0.5 Micron
Micron Rating
0.5 Micron
Carbon Block
Media Type
Carbon Block
NSF 42 Certified
NSF 53 Certified
Sign up for the Home Filter Club during checkout.
You choose how often you want your filter, and we take care of the rest.
Are you a purchasing agent? Purchasing for a business?
Contact [email protected] to gain access to case quantity discounts, account management and terms!
Product Information
Customers Who Bought This Item Also Bought
OmniFilter CB3
FiltersFast FF10CB-.5

The OmniFilter CB3 Undersink Carbon Filter (Series B) boasts being one of the most effective carbon block cartridges available to consumers today. This under sink filter removes chlorine and odors, harmful bacteria and contaminants to give you great tasting, safe drinking water right from the tap or dedicated faucet.

Note: The OmniFilter CB3 is NOT for sale in California.

If you want to continue using CB3 filters with the .5 micron rating you should consider upgrading to the OmniFilter CBF3 Undersink Filter System (Series B). As a general rule, filter housings should not be used for more than 10 years so it might be time to upgrade now.

This is the correct replacement filter for the following filtration systems only:

The OmniFilter CB3 is correct replacement for the following model numbers:

Original filters for the NutriFlow systems cost $75, but NFLI went out of business. I ordered two of the CB3's, and was blown-away by the quality of the water! If you still have any Nutrition For Life HL-250 or HL-300 filtration units, you can now replace the old blue KDF filters for half the original cost of replacement when NFLI was in their heyday, and get the most-amazing water quality that would've made both Bertram and Mitcham green with envy!! THANK YOU!

Stenn from Baltimore is right when he says to not wait for the flow rate to decrease before changing the filter, but you shouldn't use the same filter for 3 years! Carbon block filters remove chlorine taste and odor far longer than they remove lead, chemicals, MTBE, and other nasty contaminants. After several years, the filter may still be removing 95% of the chlorine, but little or none of the other contaminants, most of which you can't taste or smell. Also, after 6 months, no matter how many gallons have gone through the filter, 'bacteria farming' starts to occur. Before 6 months, the cartridge looks relatively clean, but after 6 months, pink stuff starts to grow on it. So, carbon block filters should be changed every 6 months or sooner, period. By the way, I've never used this particular filter cartridge, but based on the performance data, it's one of the best carbon blocks on the market.

The filters received are original Omni filters. Delivery was excellent and the filters were the best price found anywhere.

I've used these for years, and wouldn't consider being without it, after moving up from the 1-micron powdered carbon filter (which was fine too) when I found these carbon-blocks on sale for $27!!..I bought 3 of them. But you can't listen to the '3-6 months' estimate, and on city water don't wait for the flow to slow down as the sign you need to change it, I've been using the same one for almost 3 years, and the taste is just now starting to change, telling it needs to be changed, but flow is still full-strength. So even at $36 it's well worth it, considering how long they last. The difference making coffee with and without carbon filtering is like gourmet and military coffee! :)

The FiltersFast FF10CB-.5 is the compatible replacement for the Pentek CBR2-10. If you're tired of spending money on bottled water, this under-the-sink carbon filter is exactly what you need. Featuring lead-reduction media filters, the FF10CB-.5 has no problem reducing extra-fine sediment and that nasty chlorine taste an odor from your tap water. The FF10CB-.5 needs to be changed approximately every 3 months based on water quality and usage.

The FiltersFast FF10CB-.5 is the correct replacement for the following part numbers:

The FiltersFast FF10CB-.5 is correct replacement for the following model numbers: